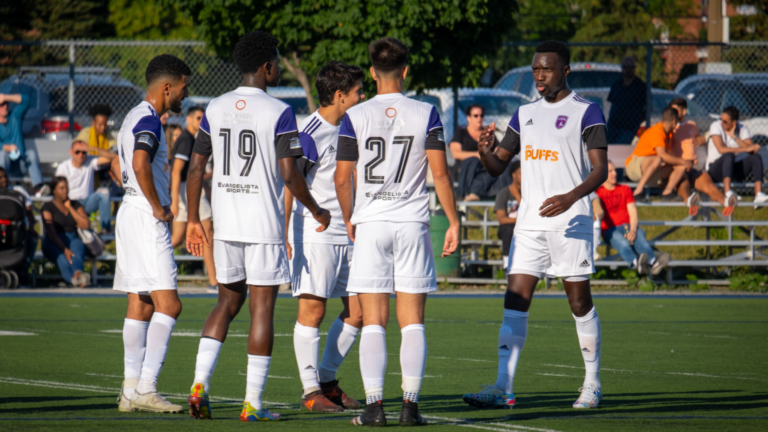 The FC Laval men’s team is playing its second season in the Première ligue de soccer du Québec (PLSQ). After a fourth place finish in 2021, expectations remain high for the club on île Jésus’s west side.

“I think it’s a little bit arrogant to give a precise position, but we want to finish as high as possible in the standings this year,” said team’s head coach Boubacar Coulibaly. “Our goal is to take control of every game in order to win, and we’re not afraid of anyone in the league.”

The FC Laval lost its first 7 games last year, but concluded the season with 7 wins in its last 10 battles, while having one of the youngest rosters in the PLSQ.

“You have to give the players credit because they have developed much faster than what I was expecting,” Coulibaly said.

Laval’s team already made sure to make it a better start this season with a 1-1 draw against the Celtix du Haut-Richelieu in its opening game, before defeating the Royal-Sélect de Beauport 2-1. Coulibaly’s team showed resilience by scoring its two goals in the last five minutes of play.

“The content of our games is very satisfying,” the head coach ensures. “[…] We can’t ask for much more than what our players gave. I think the results should have favored us a bit more.”

At its beginning in 2021, the FC Laval had a plan in mind, which was to offer as much playing time as possible to its young athletes in order to help them climb the ladder of the soccer world.

Again this year, a dozen of players from the first team are aged from 18 to 20. They’re helped by a few veterans, including Wandrille Lefebvre, who played with the Montreal Impact (now CF Montréal) in the MLS, and Adama Makan Sissoko.

“The way they’re preparing for practices and matches is pushing our young players to pay attention and look at how we manage a week of work,” Coulibaly pointed out when talking about his two veterans. “They’re examples and models who want to get closer to our young players. We’re really lucky to have them.”

The presence of many young athletes also allows the Laval coach to establish a game system that puts a lot of pressure on the opposite team.

“We have a team with very technical players who are moving forward quickly,” he said. “We like to have the ball, but often, we’re going toward the offensive zone really quickly. Sometimes, we can also let them have the ball, and decide to go take it at a specific time in order to dictate the rhythm.”

The PLSQ is counting on 12 teams for the 2022 season. Among them, there’s the arrival of the CF Montréal reserve team, which is playing in the MLS.

“That arrival is a very good thing for us,” Coulibaly said. “It will be a young and well-organized team. It’s also a partner of the FC Laval. It will allow them to see that there are some good young players in the league.”