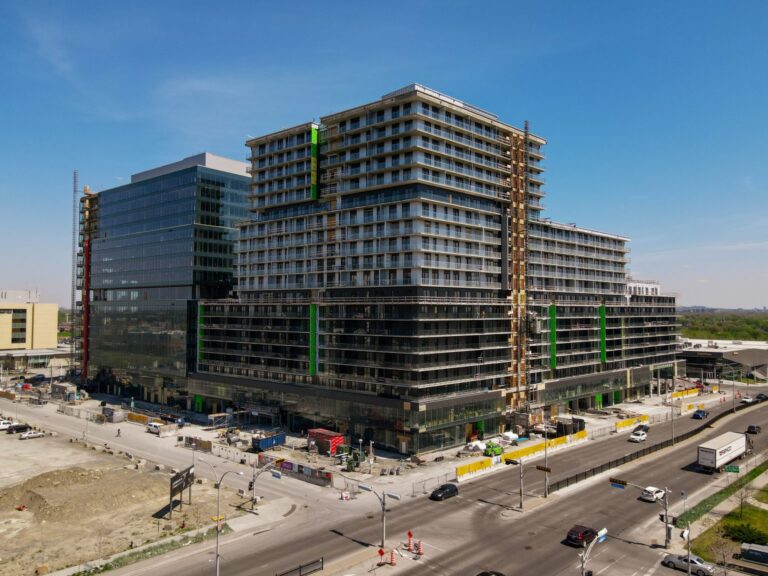 Three years after its start of construction, the multifunctional complex Espace Montmorency is welcoming its first tenants.

Partner with MONTONI and the Fonds immobilier de solidarité FTQ in this mega development project right in the centre of downtown, Groupe Sélection has delivered the first of the two residential towers on June 1. The second tower will follow this July. They can accommodate more than 700 rental condos.

In May, the consortium unveiled 11 new commercial agreements, bringing to 16 the number of banners that will partially occupy the ground floor of a two-storey basilica.

There would be only five commercial premises left to rent, explains David Paulozza, vice president of planning and development at MONTONI and consortium’s spokesperson. He specifies that he first stores will open this summer.

As for the second floor of the basilica, which will notably house the Courtyard hotel by Marriott International, there will mainly be office spaces and a possible daycare centre, according to the projected plans.

Furthermore, we’re planning to deliver the 16-storey office tower in the fall. The tower is located at the corner of Jacques-Tétreault and Lucien-Paiement streets, and is 335,000 square feet of rental space.

However, if the pandemic doesn’t seem to have affected commercial’s and residential’s rentals pace that much, the same can’t be said for leases of office space, while in the midst of a health crisis, companies were forced to turn to teleworking.

That being said, Paulozza is “confident” to make up for lost time, saying that negotiations are going well with many interested tenants.

“Right now, companies are looking for ways to bring employees back to the office,” Paulozza said while pointing out at the “avant-garde design and open spaces” of offices, but also the “social experience” offered by Espace Montmorency through its “local services”. “In a labor shortage context, it’s easier to retain its employees and to hire others by offering them a stimulating work environment.”

On the other hand, the eighth floor of that tower, whose terraces overlook the inner courtyard of the complex, has been completely redesigned in favor of a huge space dedicated to collaborative work with, in bonus, meeting rooms made available to tenants. That floor is connected to the hotel thanks to the walkway overlooking the courtyard that can be seen on the architectural renders that have been circulating for the past five years.

Announced last February, the Courtyard hotel should open its doors next December.

Let’s remember that the establishment, built for $45 million, will have 188 rooms spread over the 10 floors of the tower located in front of the Place Bell entrance, at the corner of Lucien-Paiement and Claude-Gagné streets.

Connected to the metro station, the hotel will have an underground parking lot with 1,500 spaces to serve all residents, workers, customers and visitors of Espace Montmorency.

At last, without the pandemic, the unbridled rise in the cost of raw materials and the labor shortage, the multifunctional complex will be ready on time and with the planned $450 million budget when work began in the spring of 2019, Paulozza says.