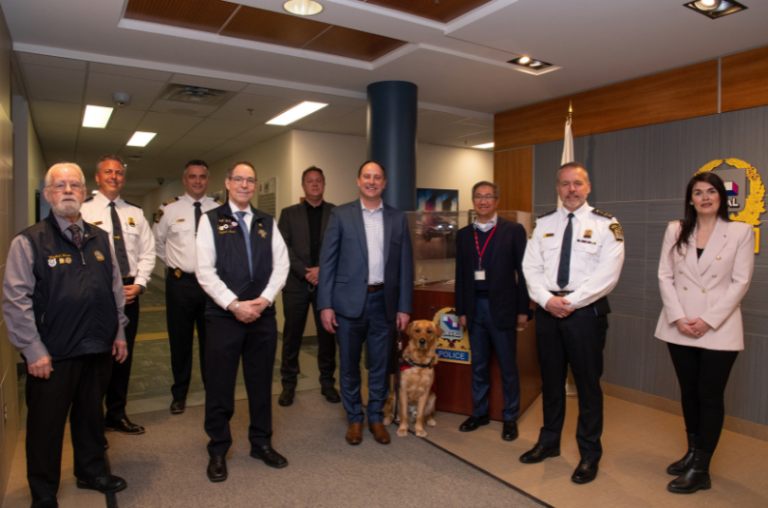 The Service de police de Laval (SPL) welcomes Kino, its canine recruit who’s joining the ranks of the new squad Chien de soutien, in order to support victims or anyone who has been involved in a traumatic event requiring emotional, if not psychological, support.

Paired with an investigator, Kino and his police partner are part of the Sex Crimes Squad.

He may also be called upon for some police interventions, as well as during prevention events.

Moreover, the duo offers support to victims during the legal process.

Kino may be present to reassure victims who will have to go through the complaint process, and then trial if necessary, both during meetings with investigators, prosecutors and during testimony in court.

As you might expect, that whole process can last over time and lead to stress, anguish and anxiety.

“The arrival of Kino among us enhances the human and innovative approach offered to victims who deal with our Service,” assures Manon Ouellet, Associate Director of the Direction of investigations, corporate affairs and the protection of the integrity and municipal ethics of the SPL, via press release. “The use of an emotional support dog is also a great tool for facilitating communication with children. Kino’s great qualities and skills will undoubtedly contribute to the well-being of those who cross his path.”

Welcoming a support dog within the SPL was made possible thanks to the involvement of several stakeholders and the valuable collaboration of partners, like the Club Lions de Laval and the Fondation des Lions du Canada Chiens-Guides.

Let’s remember that the creation of the Chien de soutien squad is part of the new service offer in public safety being implemented at the SPL, just like the Sex Crimes Squad, implemented to ensure better handling of complaints and support for victims.