A Good First Meeting between François Legault and Stéphane Boyer 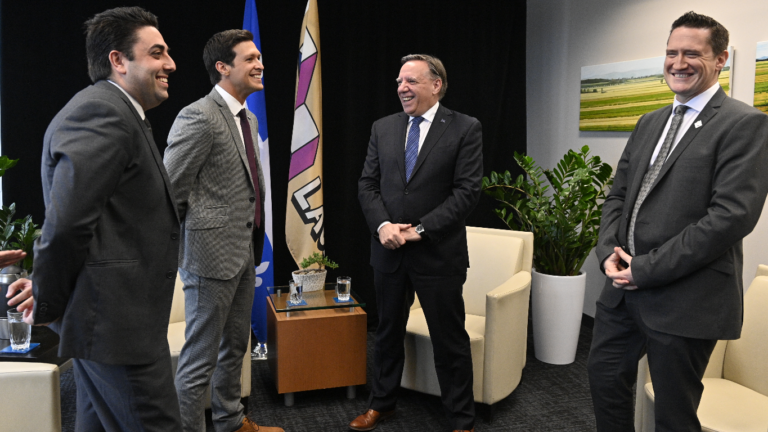 If the connection was fairly good between Prime Minister François Legault and Laval’s former Mayor Marc Demers, the same can be said with the new Mayor Stéphane Boyer.

“It’s a pleasure to work with him,” Legault said from the start of an interview with the Courrier Laval  last May.

While touring the regions, he was received at Laval’s City Hall by Boyer. It was a first official meeting, where the two men discussed on what they considered to be the priority files on the agenda of the municipal administration.

“On big issues, we get along perfectly; we’re at the same place,” Legault said, who “continues to work hand in hand” with the mayor of the third largest city in Quebec.

A feeling shared by Boyer, who said via press release that he had “great ambitions for Laval, and [is] happy to see the Prime Minister share [his] vision”.

“We’ll continue our great collaboration to work on important files for Laval residents, such as the development of structuring transportation, the fight against climate change, and accessibility to affordable housing,” Boyer said in the press release.

As for the expectations in order to stop the housing crisis, the Prime Minister said “there are more than a billion available since two years, but we can’t manage to build those housing”, which is a sign that Quebec, municipalities and the Société d’habitation du Québec need “to work better together”.

Marc Demers’s successor has committed to investing $100 million over four years for the acquisition, protection and enhancement of natural environments.

“We want to present a global plan to reduce GHGs [greenhouse gases], and I’d like the Government of Quebec to finance part of the plan like it did for Montreal,” Boyer declares while referring to the $117 million envelope paid earlier this spring to the Plante administration to enable it to execute its Climate Plan.

The Laval strategy would target, in part, the preservation of biodiversity and natural environments through acquisition and the continued electrification of the municipal vehicle fleet.

“The government has just issued a call for tenders in order to purchase 88 electric buses in Laval,” the Prime Minister didn’t fail to remind, for whom the environmental protection also involves public transport and the electrification of bus fleets.

In terms of public security, Boyer reiterated his full collaboration to Legault for the implementation of programs and new initiatives aimed at preventing violence in Laval.

“Everything we can do, we will,” he said, while pointing out at the twenty arrests and a series of searches that have taken place in Laval those past months. “We’ve doubled the size of the investigation team affected to organized crime and firearms [trafficking].

Thirteen new resources have been hired since last summer through allocated budgets from the two levels of government.

Although the case of the Grande bibliothèque and Centre de création artistique professionnelle hasn’t been discussed during the meeting, Legault confirms that the project is clearly registered in the Plan québécois des infrastructures (PQI).

In July 2020, during a virtual forum organized by Laval’s Chamber of Commerce and Industry, the Minister of Finance, Éric Girard, mentioned the government’s interest in investing in this infrastructure project estimated at around $100 million.

“In April, we submitted the functional and technical plan; we’re asking the government to invest a considerable part in this cultural infrastructure project, involving 15 Laval organizations,” Boyer said.

Considering that Laval has always suffered from chronic underfunding compared to the province’s other regions, it could very well ask Quebec to pay half of the bill.