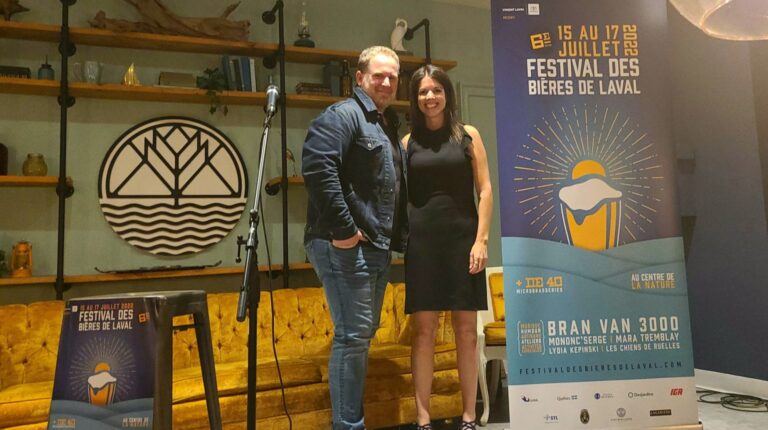 For the first time since 2019 because of the COVID-19 pandemic, Laval will have its Festival des bières, from July 15-17, at the Centre de la nature.

More than 85 local exhibitors, including 40 Quebec microbreweries will take part in this sixth edition of the festival.

“In addition to being a discovery and tasting event, the mission of Laval’s Festival des bières is to educate attendees about the world of brewing, while promoting discussions with brewers from everywhere in Quebec,” we can read in the press release of the event.

A lot of Choices

Again this year, family and variety are put forward at the festival. Spokesperson since the first edition, Alexandre Goyette recalls the variety of products and different activities available during the event.

“There are also tastings,” the well-known comedian said. “We’ve got to that point with beer. It’s also about tasting products and discovering new things. Some brewers are also making wonderful non-alcoholic products. I remember a year when I had done six months without alcohol, and that happened to be at the same time as the festival. I had managed it very well during the event with all the varieties of products offered.”

Goyette adds that children can also have fun at the festival. Among other things, music shows, animations and inflatable games will be available for the youngest.

“There’s a family aspect to it, since after all, the event isn’t a big drinking party,” Goyette said. “I’m there with my children every year. We’re taking advantage of the playground for them, and it’s really nice. It’s as if they succeed to combine the two worlds together, and it works really well.”

This year, the festival will have compost bins on its site for the first time. Although Marilène Barale, instigator of the festival, has always worked on sustainable development, she was looking to present an even more ecological event in 2022.

“Anything plastic, which means water bottles or glasses, won’t be distributed,” Barale explained. “It was one of the waste we had the most. We’ve already been offering an official reusable cup, but some people weren’t buying it. Now, they’ll have to buy it, or bring one from home.”

Taking the metro will once again be free on the entire STL network, upon presentation of a festival ticket. Evening shuttle services on Friday and Saturday will also be offered. Those shuttles will directly go to the Montmorency station after the festival.

There are more than 30,000 people expected at the Festival des bières. La Festivaloise will be the official beer of the sixth edition of the festival, which comes from a collaboration between Pit Caribou and Laval residents from Les Insulaires Microbrasseurs, located on Boulevard de la Concorde.