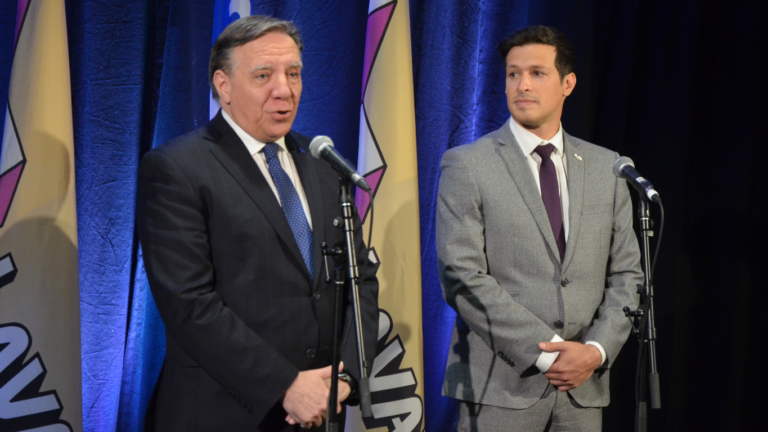 “There must be an equivalent in Laval and on Montreal’s south shore,” he followed during a press scrum held with Mayor Stéphane Boyer, from the communications room of Laval City Hall, on May 17.

From the start, Legault had indicated that the extension of the orange line, and the development of a structuring mode of public transport on Saint-Martin’s axis were among Boyer’s priority requests during their first official tête-à-tête.

“It’s time for Laval to connect its neighbourhoods together, making it easier to travel on the territory, Mayor Boyer explained while indicating his clear preference for the deployment of an integrated east-west transport network in the neighbourhoods, instead of an extension of the REM in the right-of-way of Highway 440.

Legault agrees there’s a need to improve public transport options on the north-south and east-west axes, specifying that Quebec and Laval “were looking at different scenarios”.

“What’s important for me is that citizens have access to a variety of low-carbon transport modes,” Boyer said, recalling that 70 per cent of greenhouse gas (GHG) emissions in Laval are from the transport sector. “After, if it goes by a tram, a BRT (bus rapid transit) or metro, I think the studies will be able to guide us on the choice of technology. But, above all, it’s the citizens’s mobility that’s important.”

That being said, the Bus Rapid Transit (BRT) project in the axis of boulevards Notre-Dame/De la Concorde – in the pipeline since 2018 – remains a priority for its administration, Laval’s Mayor ensures.

As for the implementation of new reserved bus lanes, carpooling and electric cars on Highway 15 (North), the Minister of Transport, François Bonnardel, will make the announcement in Laval in the upcoming weeks.

“It’s progressing, and we want the work to start this year,” Legault said in an interview with the Courrier Laval.