Laval Fifth in the World in Toss & Fetch 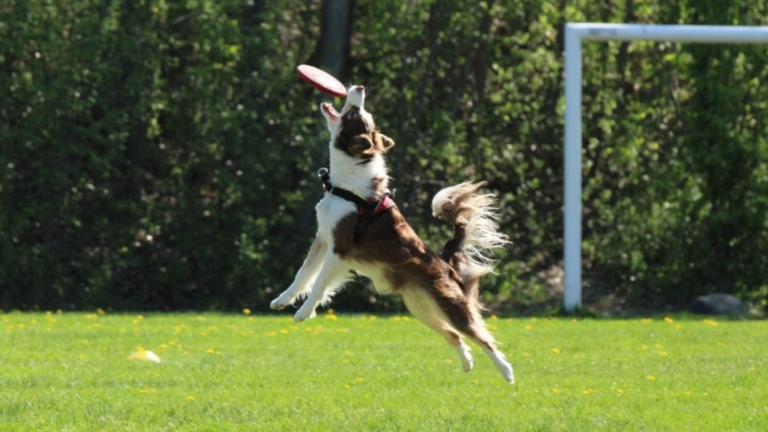 Laval’s Toss & Fetch team ranked fifth in the world during the 2022 spring season.

It’s the best seasonal performance of Laval’s team since its debut in the K9 Frisbee Toss & Fetch circuit, which regroups nearly 130 teams from around twenty countries.

“The team really evolved a lot in three years,” said Nathalie Magnan founding member of Laval’s club. It’s been very good this season, and some talented rookies have joined us. Our ranking is the best in Quebec and Canada. Only four teams from the United States moved past us.”

At Toss & Fetch, players have 2 rounds of 60 seconds to throw as many frisbees as possible to their dog. The farther the object is caught, the more points the team gets.

Results obtained are sent to the league organizers, who then establish the weekly ranking, and determine the winners at the end of the fifth week of competition.

In the spring of 2022, Laval’s team had members, which represents an increase of 10 compared to the summer of 2020. People participating are aged from 12 to 87. They’re given a disability, as in golf, to avoid being discouraged when they’re starting.

“There are many grandparents coming with their family,” specifies Magnan. “There are even players from elsewhere who are coming to play with us.”

According to the team’s founder, Anne-Marie Gauvin and her dog Zoé are one of the pairs that stood out last season. They joined the team in the winter, and have already been moved up an individual category due to their good performance.

The Toss & Fetch summer season kicked off in June. Laval residents hope to have as good a season as the previous one.

“I’m expecting a similar ranking,” said Magnan. “Montreal’s team, which didn’t play last season, will be back. They’re matching us, and I think it will be a great rivalry.”

Laval’s squad also has her sights set on the Worldwide Championship, which will be competed over a single day next September. Expectations will be high in an attempt to bring home a first world title.