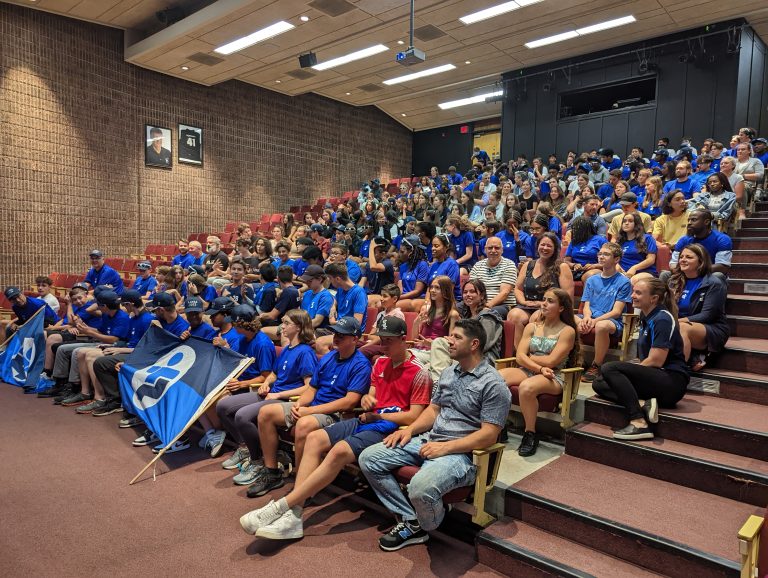 Sports Laval gathered, on July 14, its whole formation that will participate in the 55e Finale des Jeux du Québec – Laval 2022, during an evening used to prepare what’s coming from Juy 22-30.

It took place at the Horizon Jeunesse high school, in Auteuil.

For the occasion, the 161 athletes, 41 coaches and companions, as well as the seven missionaries of Laval’s region met with Mayor of Laval Stéphane Boyer, and President of Sports Laval Geneviève Cossette.

“I just want to congratulate you on getting to where you are today,” Boyer said during the region’s meeting. I’m sure you are as excited as we are to be at the Jeux du Québec. […] We’re counting on you to make us shine. We want to show the other regions that we’re the best.”

“You can really be proud of that journey you’ve accomplished,” Cossette added. “As a mother of two girls practicing sports at the pre-national level, I know how much time you’re putting into training. […] For some athletes, it’s just the start of an amazing career. For others, it’s an unforgettable experience during which you’ll meet new people, create new links. Live it to the fullest.”

Cossette also took a moment to recognize the work of the parents, who get involved in helping their children participate in various sports competitions.

Gymnast Félix Dolci could not be at the region’s meeting. However, he still shared a message to the young athletes in a pre-recorded video.

“I’d like to congratulate you all for having surpassed yourselves throughout the year in order to be here today, and play the Jeux du Québec,” Dolci said.

Let’s remember that Dolci is the most decorated athlete in the history of the Jeux du Québec, but also Canada Winter Games. He participated twice in each of these competitions, winning a total of 18 medals.

The rest of the evening was to prepare Laval’s athletes for the provincial competition, which will begin on Friday, July 22.

They’ve been informed on how to proceed when arriving on the site, and how their schedule works when it comes to mealtimes and bedtime.

Athletes will have to be tested five days before the start of their competition block, as well as the day before the competition.

They’ll also have to do a daily rapid test. If an athlete eventually tests positive for COVID-19, he will then be placed in isolation, before leaving the site facilities with a family member.