The King of the Bafous is Visiting Laval 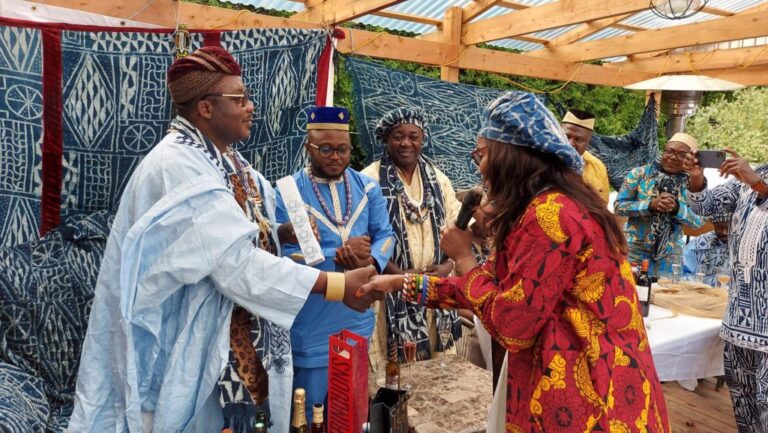 A few weeks before the Pope’s visit in Quebec, Laval’s region was receiving a royal visit from Africa. Victor Kana III, king of the Cameroonian chiefdom Bafou, was in Laval from June 15 to July 5.

It’s one of the largest chiefdoms in the country. It’s the second largest in western Cameroon for area and population, just behind Bandjoun. The king has been leading his community since 1994.

Victor Kana III settled here with his close guard, in a rented house near Pont-Viau and Laval-des-Rapides sectors.

“I was outside the country, so I decided to rent my house for a few months,” said Laval resident Roxanne Jean, who’s owning the place. “They told me they’d like to rent it 17 days in order to host a king. Of course, I didn’t believe them at first.”

However, after discussing with the organizers, she understood it wasn’t a bad joke. She wanted to put everything in place for the king’s coming.

The king’s coming didn’t pass over in silence in the neighbourhood. Many neighbours told Roxanne Jean they were impressed by the welcoming ceremony.

Victor Kana III’s visit was then punctuated by stops in Montreal, Quebec and Ottawa to showcase the Bafous’s community.

“We want to promote our culture, and show that even those who’ve gone far from our village shouldn’t leave their culture,” the king said in an exclusive interview with the Courrier Laval. That’s one of the reasons we’re here.”

Roxanne Jean says her meeting with the king and his close guard was particularly touching. She believes she has discovered a peaceful, open-minded, generous and respectful community.