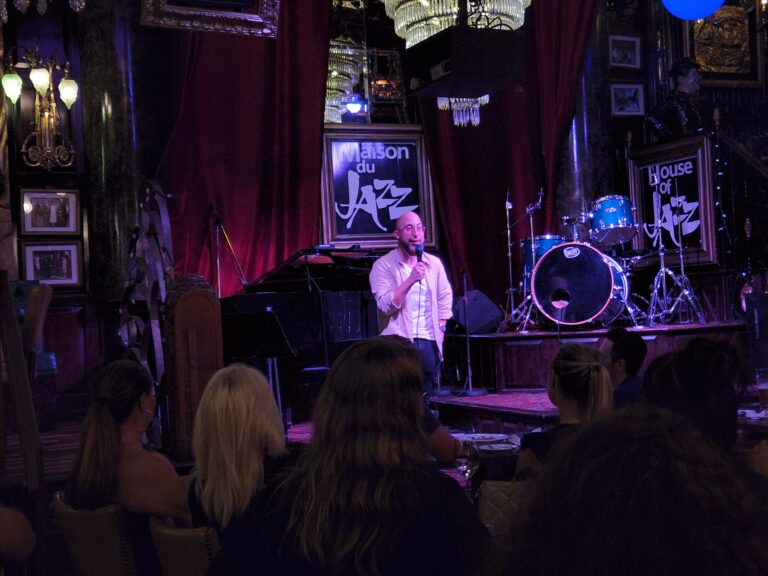 Charles Daghlian, organizer of LAVAL'S GOT JOKES, was also the host of the event last night at the House of Jazz. (Photo 2M.Media - Alec Brideau)
Share
Facebook Twitter LinkedIn

Fully in English, the stand-up show, when in Laval, is held at the House of Jazz, in Chomedey. It takes place every last Tuesday of the month.

Charles Daghlian, organizer and host of the event, said comedians from everywhere want to come to Laval and perform at LAVAL’S GOT JOKES.

“Laval doesn’t have any of those comedy clubs,” Daghlian said. “To be able to offer it, and having people responding that way to the offer, it makes us want to do more. Many residents are coming back for every editions, and comedians who performed elsewhere are asking to have a stand-up in one of Laval’s events.”

Having people coming back for every show also makes Daghlian pick different comedians every month, in order to offer new faces and jokes to the public.

“That’s the fun part of it,” he said. “It’s nice to hear the feedbacks after. It’s never the same comedian who comes out as night’s favourite.”

A positive thing about that event is that despite having seven comedians performing last night, topics weren’t repetitive or similar.

Comedians were discussing love, school, religion, sex and drugs, dating apps, and even the House of Jazz.

One of the comedians last night was Michelle Forrester, Montreal native. She wasn’t afraid to talk about things people are often facing in life, but won’t necessarily discuss with others, especially in a funny way.

“I’m trying to make fun about topics that are normally more serious, or things that normally would make me sad,” Forrester said. “Sometimes when you’re writing a joke, and looking at it from the outside, you’re realizing that almost everything can be funny if you’re looking at it the right way. Also, by telling those jokes and stories to strangers, it detaches you a little bit from it since you’re seeing their reactions, and it feels like you’re talking about someone else’s story.”

The public gave a great round of applause to Andrew Khoury, who wasn’t afraid to discuss his homosexuality, in relation with his origins, for his stand-up.

Headliner of the night, Massimo Cannistraro concluded the event, making sure people would leave the place, still laughing.

Gunshots Injure Someone Near the Adonis Market