Giving Back with Cycling after Two Fights Against Cancer 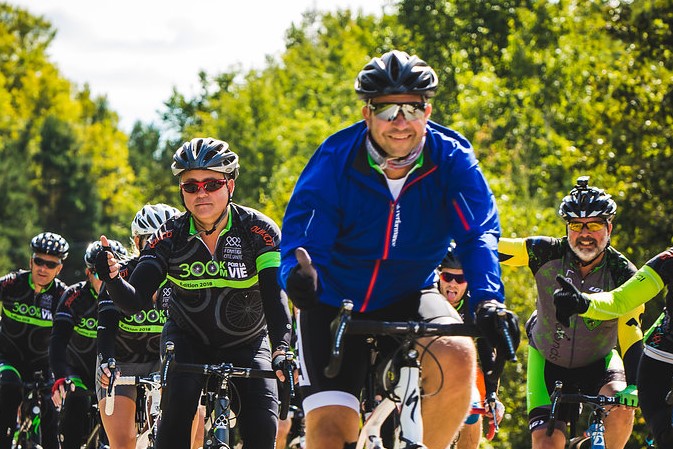 Since 2017, Normand Fonseca has been pedaling. He does so to advance cancer research, but especially to give back for all the help he received when himself was fighting the disease.

The man, who lives in Sainte-Thérèse, was first diagnosed with lymphoma in 2012. He underwent treatment at the Centre intégré de cancérologie de Laval (CICL) until the end of the year. That period was very difficult for the whole family, including his wife Suzie.

Three years later, she decided to participate in the 300 kilomètres pour la vie (300 kilometers for life), organized by the Fondation Cité de la Santé, in order to give back to the CICL.

“You have to know that we were completely strangers to cycling,” Fonseca specified. “Suzie and her friend, Nancy, decided to sign up for the event after a spin-a-thon they attended. Me and Virginio [Nancy’s spouse] were wondering what they were getting into. We thought it was a bubble, but they did it in 2015.”

The following winter, another hard news came: Fonseca had a recurrence of cancer. This was one more reason to encourage Suzie and Nancy to participate again in Laval’s foundation challenge. This time, Virginio and several other family friends joined them to create the Braves team.

Fonseca also wanted to participate in the event, but he was weakened due to the treatments.

“I had my new bike and I wanted to pedal,” he said. “Our usual route is 40 to 50 kilometers between Blainville and Saint-Jérôme. I cycled 14 kilometers, then I returned home with difficulty and misery. I slept the rest of the day. I was burned, I wasn’t able.”

He had to resign himself to supporting his team aboard a vehicle that followed them on the round trip between Laval and Trois-Rivières.

“In 2016, they all decided to do the challenge for me,” Fonseca noted, emotionally. “That was really it that year. It wasn’t the Portuguese dinners or Boston Pizza for fundraisers, but the dinners for Normand.”

After more treatments and a bone marrow transplant at the end of 2016, Fonseca came out weakened from his second battle with cancer. However, he had only one goal in mind, which was to participate in the next edition of the 300 kilometers for life.

After many training sessions and preparatory team outings, he felt ready.

“It’s a psychological challenge,” he says. “You don’t know how it will go, just like when your oncologist tells you he’s going to try a specific protocol to beat cancer. The first time is the unknown, like when you arrive at the cancer centre.”

He added that although the last 50 kilometers can be difficult and uncomfortable, it’s still much more comfortable than being in a chemotherapy chair. “By saying that, everyone stops talking for the end of the ride, endures the pain and focuses on finishing the challenge,” he said.

Since his first participation in 2017, Fonseca has cycled in all the following editions. The Braves team is still very present, being even the one that has collected the most donations for the 2022 edition, which will take place on Sept. 10–11.

“In 2012, the doctor told me I had a 70-75 per cent chance of fighting cancer,” he mentioned. “It was already good. Then, the chances were up to 80-85 per cent when I did it again. This is thanks to medical advancement. All funds are for something. The more we give, the more resources we can bring.”