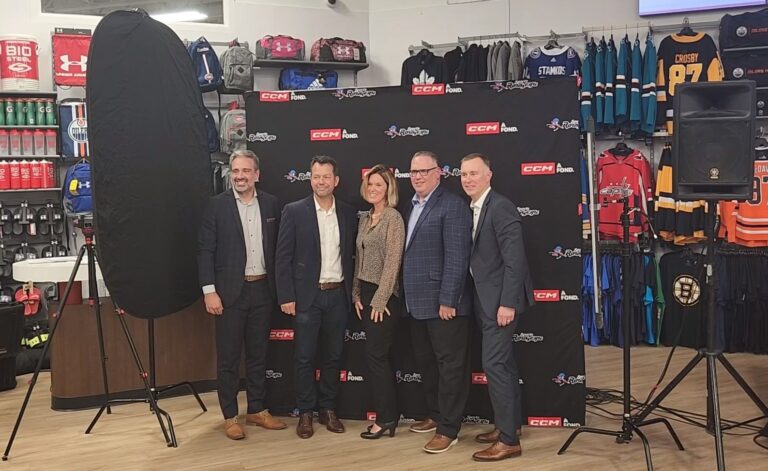 A press conference was held yesterday at Sports Rousseau in Laval to announce the launch of a new foundation to help young people play hockey.

That foundation, Le BUT, is mostly an idea of Pierre Gendron, director of operations and president of Sports Rousseau – Groupe Gendron 3.0, and his colleagues.

The goal of the foundation is quite simple, as there’s no membership needed like some other foundations.

People wanting to help young people who can’t afford to buy equipment and play hockey can go to a Sports Rousseau store and drop off their hockey items in a red box identified in this regard, as explained in a press release.

Gendron was visibly moved by the official launch of the foundation. A video about him, showing clips of him younger, playing hockey and sharing beautiful moments with his loved ones, was also shown on a screen at the start of the conference.

“Like we saw in the video, it’s because of my mom and my love for hockey that I’m here today,” Gendron said. “My mom’s no longer with us now, but I want to thank her. She gave me everything. She made sure I didn’t notice anything. We weren’t rich, but I never noticed that. She worked very hard, had to do a lot for my registrations and often found me someone to drop me off and pick me up at games and practices.”

Joël Bouchard, former head coach of many junior and professional hockey teams, in addition to having had other important roles in the domain, concluded the press conference nicely.

“It’s now our job to help those young people,” said Bouchard. “When this press conference is over, I will go shopping and buy some items to put in the box. Today, I am a lucky man to be here and to be able to give back. The simple fact of that I know the equipment I’m going to buy will end up somewhere in Quebec, and help a young person to have an extraordinary experience, as we’ve had, us here, that gives me chills.”