The CAQ Wins Four of the Six Ridings in Laval 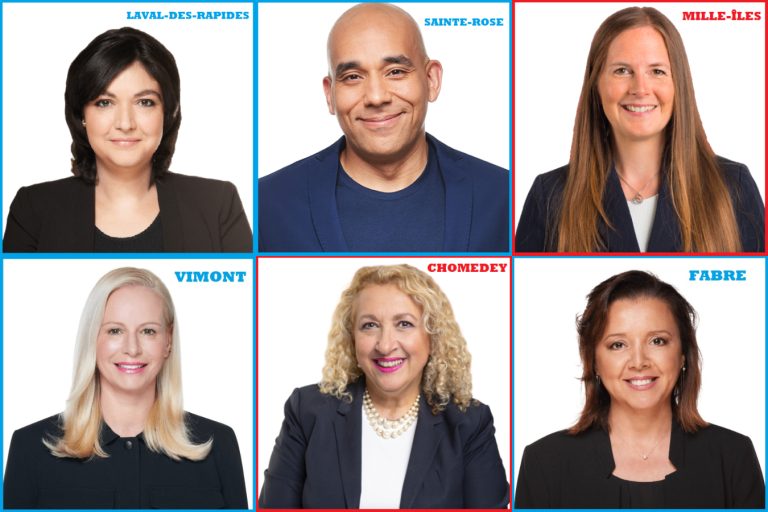 In the riding of Sainte-Rose, the victory of outgoing deputee Christopher Skeete was never in doubt. Re-elected with the strongest majority in the region, Skeete will team up for the next four years with Valérie Schmaltz (Vimont), Céline Haytayan (Laval-des-Rapides) and Alice Abou-Khalil (Fabre), all three elected for the first time in the National Assembly.

Laval’s two other ridings remain liberal, but will be represented by two new deputees in Virginie Dufour (Mille-Îles) and Sona Lakhoyan Olivier (Chomedey).

In Laval-des-Rapides, after a hotly contested battle, Céline Haytayan finally got the better of the riding’s outgoing deputee, Saul Polo, who was seeking a third term.

The electoral turnout in Laval-des-Rapides reached 61.5 per cent, down two tenths of a percentage point compared to the 2018 election.

Vimont also had a close race until the end, this time between Valérie Schmaltz (CAQ) and Anabela Monteiro (LP).

At the end of the evening, Schmaltz finally won by 1,415 votes over the one who had headed the riding’s office for 10 years, then represented by the deputy Jean Rousselle. This win for the CAQ thus put an end to a sequence of seven consecutive Liberal electoral victories in Vimont.

Alice Abou-Khalil (CAQ) won in what was another tight battle in her riding, against Sonia Baudelot (LP). That puts an end to a 19-year-long liberal reign in Fabre. Abou-Khalil won with a majority of 302 votes.

The electoral turnout in Fabre was 62.6 per cent, which is up 1.4 percentage point compared to 2018.

Re-elected in Sainte-Rose, Skeete registered the strongest majority of the six candidates elected last night in Laval, ahead of Michel Trottier (LP) by 5276 votes.

Trottier concluded the evening with 24.2 per cent of the votes, followed by Karine Cliche (QS) at 14.3 per cent, Lyne Jubinville (PQ) at 12.3 per cent, Stéphanie Beauchamp (CP) with 9.4 per cent, and Pierrette Kamning Nguendjong (GP) with the remaining 0.8 per cent.

The electoral turnout in the riding has fallen by 2.5 percentage points in four years, from 70 to 67.5 per cent.

Succeeding Guy Ouellette, the new deputee Sona Lakhoyan Olivier earned the trust of 36.5 per cent of voters, which translated into a comfortable majority of 3,198 votes.

That said, support for the LP in this liberal fortress continues to crumble, as the overwhelming majority of some 26,000 votes obtained in 2014 had already been reduced to 7,968 votes in 2018.

As for the participation rate of 54.5 per cent, it’s about the same as that observed four years ago, up by half a percentage point.

The Liberals have dominated in Chomedey since the creation of this riding, in 1980.

Finally, in Mille-Îles, Virginie Dufour has managed to keep the riding in the hands of the LP for an eighth consecutive election, resisting to the push of the CAQ that began four years ago.

Trailing all evening, the former municipal councillor of Sainte-Rose made an impressive an comeback and took the lead for the first time shortly after 10 p.m., when more than 85 per cent of ballot boxes had been counted.

In Mille-Îles, 67 per cent of the 44,401 legal voters went to the polling stations, up by half a percentage point compared to 2018.