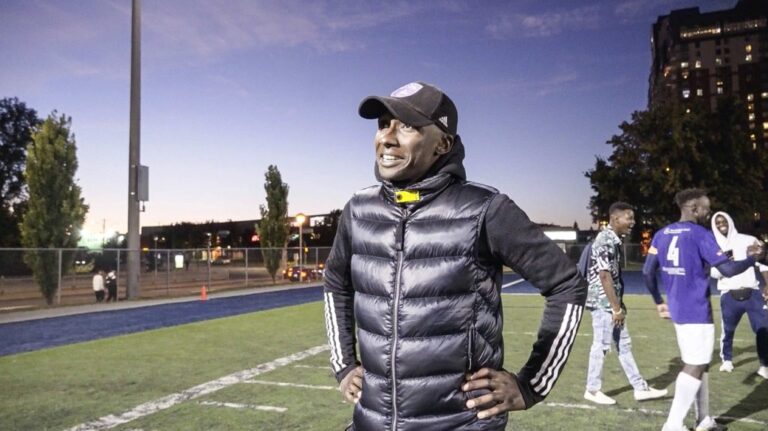 Boubacar Coulibaly is a soccer fanatic. Both as a player and coach, all the reasons are good for him to find himself on the field.

Arrived from France to study at the University of Montreal, the current head coach of the FC Laval had joined the team of that same university. He also played in senior AAA, which was the highest level in the province at the time.

His strong performance on the field earned him the title of Canadian University Player of the Year. Later, he joined the Trois-Rivières Attak, the defunct Montreal Impact (CF Montreal) academy club, with which he was crowned Canadian Soccer League champion in the role of captain.

He then retired to start his career on the sidelines, becoming assistant coach with the University of Montreal Carabins.

Shortly after his start in coaching, Coulibaly was approached by Marinos Papageorgopoulos, current manager of the CF Montreal Academy, who managed the former club of Chomedey. This was part of the merger leading FC Laval’s creation.

“He brought me to work with the 2002–03 group,” Coulibaly explained.”I had the chance to work as I wanted, and to have complete trust in what I was doing. We took our time.”

He admits the results weren’t always there at first.

“Results weren’t fantastic, but the youngsters have to learn how to lose games,” he said. “It’s necessary, and it pays off when you’re taking the time, and let young athletes develop.”

That age group’s also an integral part of the title won this summer by the FC Laval, in the men’s section of the Première ligue de soccer du Québec.

“They’re young people with whom I have had the chance to work since they were 11 or 12 years old,

“These are young people with whom I have had the chance to work since they were 11 or 12 years old,” Coulibaly said. “If we’re looking at the reserve team, they’re second in their league. They’re young athletes who are extremely solid mentally, and it turned out as we hoped.”

In addition to working with the younger players, Coulibaly continued to coach with the Carabins for a few seasons, winning two university championships.

It allowed him to rub shoulders with certain players, such as Wandrille Lefebvre, who is part of the champion edition of the FC Laval.

He is now 100 per cent focused on the performance of Laval’s team, while continuing his work with the Carabins. He believes the success of his project is linked to his collaboration with the players.

“I know I wasn’t always easy to manage as a player, because I had in mind what I wanted to do,” he admitted, laughing. “Today, it reflects on my way of coaching. The players want to be in charge of the project in the same way as the coaches. That’s the vision that I try to put in place by including everyone in the process.”