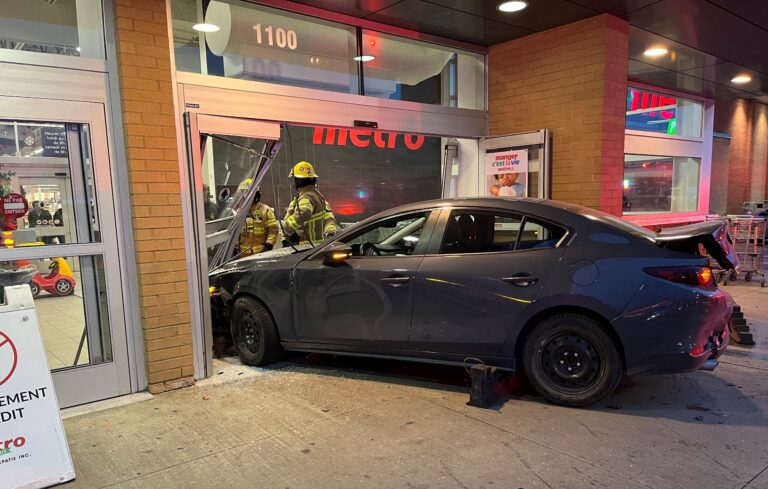 The scene was then entrusted to officers from the Service de police de Laval, to investigate the circumstances of that spectacular accident. (Photo courtesy)
Share
Facebook Twitter LinkedIn

A man lost control of his car, hitting a pedestrian and other people, before breaking through the glass front doors of the Marché Métro Plus Dépatie, located on de l’Avenir Boulevard.

The scene occurred around 4:16 p.m., time of the 911 call, yesterday afternoon, in the busy sector of Laval-des-Rapides.

An 81-year-old man, with a 54-year-old passenger by his side, was trying to park his car at the supermarket.

Wanting to position himself to immobilize his car in a parking space, the man first backed into a car, already parked behind him, and inside which was a lady.

In panic, the driver then made a turn, and pressed the accelerator, hitting a 41-year-old woman who was on the road.

She ended up on her hood, while the 81-year-old man then hit two other vehicles, as well as a 68-year-old person. He then hit the two posts installed in front of the main entrance to the business.

It propelled the 41-year-old woman to the ground, the latter finding herself in an unfortunate position, partially lying under the engine block of the vehicle, which then smashed the front doors in its tracks.

Arriving on site at 4:20 p.m., barely four minutes after the 911 call, the eight firefighters required for the intervention, two units from Laval’s Fire and Safety Department, quickly gave first aid to the victim.

After stabilizing the victim, firefighters were able to hand her over quickly, at 4:23 p.m., to the Urgences-santé paramedics, so that she could be transported to a hospital. Luckily, her condition remains stable.

As for the other two people injured, they were both treated at the scene for minor injuries.

The scene was then entrusted to officers from the Service de police de Laval (SPL), to investigate the circumstances of that spectacular accident.