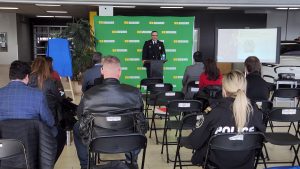 This year, Laval residents will once again be able to take advantage of the drive-home service offered by Opération Nez rouge Laval – Basses Laurentides.

It has therefore been 27 years for the organization Opération Nez rouge Laval – Basses Laurentides, which exists since 1986.

“I would like to thank all the volunteers, who are giving their time and are dedicating themselves to make sure everyone has a good holiday season,” said Chief Inspector of the Service de police de Laval (SPL) François Dumais. “On behalf of police forces, it’s an honour today to speak on their behalf.”

Those same volunteers are helping their community in all ways possible, since in addition to making the roads safer, all of the donations raised will once again be used to support local organizations related to youth and amateur sport, the Opération Nez rouge press release mentioned.

However, with about fifty operational centres in the province, thousands of volunteers will be needed to provide rides. Registrations have started, and are continuing.

Let’s recall that Opération Nez rouge is a non-profit organization, whose goal is to educate the population to adopt better behaviors, i.e. to avoid driving while impaired.