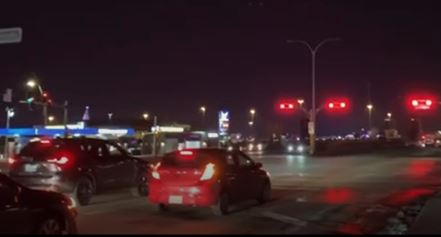 It’s now been several weeks since Saint-Martin boulevard, at the height of de l’Avenir Boulevard, up to Highway 15’s viaduct, has been without lighting during evenings and nights.

Passing almost daily in the area, Tony Sutera Sardo is starting to find the situation particularly dangerous, especially since that’s an area used by many cars and pedestrians.

The Laval resident also tried to find out more about the situation, contacting the City of Laval by several means in recent weeks. After being redirected from a department to another, by phone, Tony Sutera Sardo took advantage of social networks to send messages to the City, on Facebook and Instagram.

“weeks passed, and as it’s very dark in the evening, it can end up being favourable to accidents,” he said. “I’m wondering what’s happening, because it’s too long. If the lack of lighting had only lasted a week, I would have thought it was perhaps just a lack of equipment, or something like that. It’s  a boulevard, not a secondary street. It’s not that a street wouldn’t be important, but on Saint-Martin, there are a lot of people passing by.”

When the City replied to the message, it asked Tony Sutera Sardo for his contact details. He obviously didn’t understand the link with the situation.

“I couldn’t understand why, because yes, I can give them my contact details, but just let me know how soon it will be case closed.”

By email, the City of Laval told the Courrier Laval News “it is working to rectify the situation as soon as possible, given that the defective main circuit breaker of the Saint-Martin Boulevard lighting circuit can’t be replaced without de-energization of the circuit by Hydro-Québec”. It adds that this is an important issue of prevention, since the safety of municipal teams could be “seriously compromised”.